From the Tacoma News Tribune…

Visitors to Point Defiance Park will soon be able to walk through an “enchanted forest” where Humpty Dumpty, as big as life, is perched on a wall, Little Boy Blue is blowing his horn, Jack and Jill are carrying their buckets up a hill, and Old Mother Hubbard is apologizing to her dog because she’s out of bones. Never Never Land is scheduled to open its doors in a few weeks, on a 15-acre plot of wooded land just north of Fort Nisqually. Never Never Land will be one of only two “enchanted forests” on the continent. The other one is at Victoria, B.C., where more than 30,000 people visited last year. 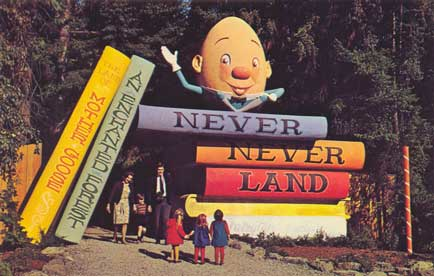 Truly pioneers in creating memorable visitor experiences, Jimmy Reuter was the general manager of Never Never Land at the time; Alfred Pettersen was the project manager and one of seven owners; and Jean Jacques André designed the exhibits. Behind the scenes Joan André refurbished and created some of the figures. Alfred Pettersen shared his memories with me:

Most of the figures used in the Tacoma project were made from rubber molds that we made and cast at the house your mom and dad had before their current one. If memory serves me correctly, your mom was the one who painted all the figures.

The original figures plus the large 8 foot high Humpty Dumpty that sat atop the book-like entrance were made by Elek Imredy, a brilliant sculptor who fled from Hungry during the revolution in 1956 – check that on google – I think that was the date – who came to Canada and settled in Vancouver. What was unique about his work was that he was one of the first – if not the first – who created the figures in clay first, then surrounded them with a plaster of paris to make a mold and, when the plaster mold dried, he cast the actual figure in fiberglass. That made them very light to carry but very strong in terms of withstanding the weather and attempted vandalism.

The houses and various sets in the park, like the house for Mother Hubbard and the Pie Stand for Peter Pie Man, were designed by your dad and made out of wood by Jim Reuter’s dad, David Reuter.

One of the owners, John Hewitt, eventually bought everyone out of the project and kept until he sold it to the Tacoma Park Board. They operated it for a number of years but just didn’t have the budget to keep it well maintained. They eventually closed it (2004) and, under some arrangement with the park board, John Hewitt ended up with all the figures.

Disneyland had opened July 17th, 1955 so the theme park concept was still quite new in 1964. Congratulations and Happy 50th Anniversary to our innovators and founders!

We’d love to hear your memories of visiting Never Never Land or Wooded Wonderland. Please add your comments to our blog!

I visited Never Never Land when I was 12 or 14 … I will need to check… at any rate — it was, truly, an enchanted forest. There was an amazing sense of darkness … it was palpable… the sculptures were definitely not at all like Disney… they had an intense feeling —

I remember the way you could walk through and let your imagination take hold … it was just so beautiful — Golden Gate Park in San Francisco (with the Alice In Wonderland) echoed this.. but Never Never Land was small, and not at all a spectacle. There was a certain intimacy that really did make one connect.

I did not realize until now that John Hewitt was the owner. I really applaud him for supporting a concept that had ties to fine art ….

Thank you for posting this It brought tears to my eyes.